Could this luxury EV be a game-changer? 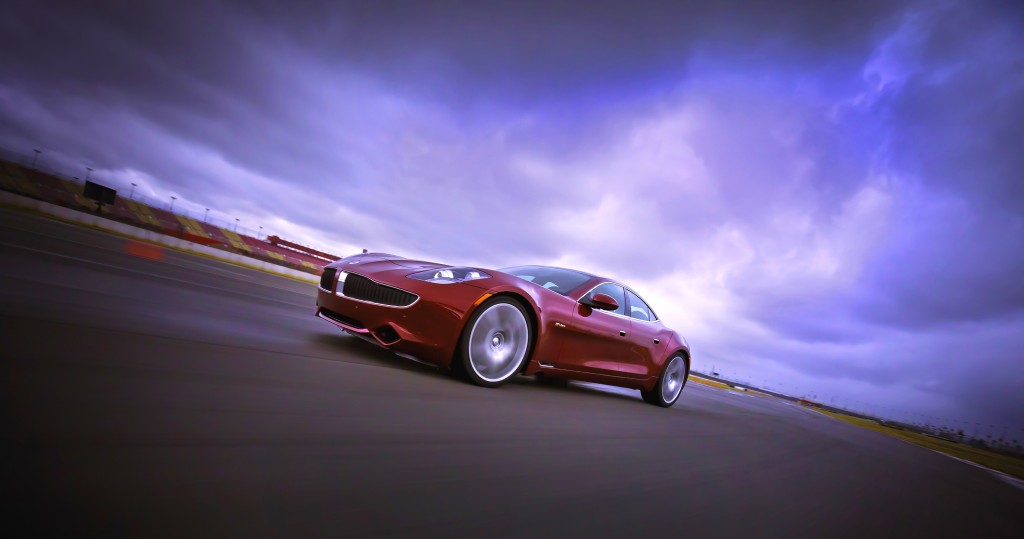 Faster than a Quattroporte, leaner than a Prius!

LEONARDO DICAPRIO, LISTEN UP. Cameron Diaz, pay attention. It’s time for you guys to upgrade your run-of-the-mill Toyota Prius Hollywood runabouts to the newest kid on the block. Meet the Fisker Karma, the world’s first true electric vehicle with extended range. And crikey, does this multi-talented youngster find itself in a unique position.

The brand new American limo not only boasts Mercedes-level luxury and BMW-like handling wrapped in a sleek exterior worthy of a Maserati badge, but delivers some of the greenest credentials around. Packing a 400 horsepower punch, this 4-seater, 4-door sedan generates cleaner C02 emissions and better mileage than a Prius, delivers 80kms of electric-only driving and even features solar cells and planet-friendly trim. And where better to get behind the wheel of the first pre-production models than at its home base in sunny Southern California. 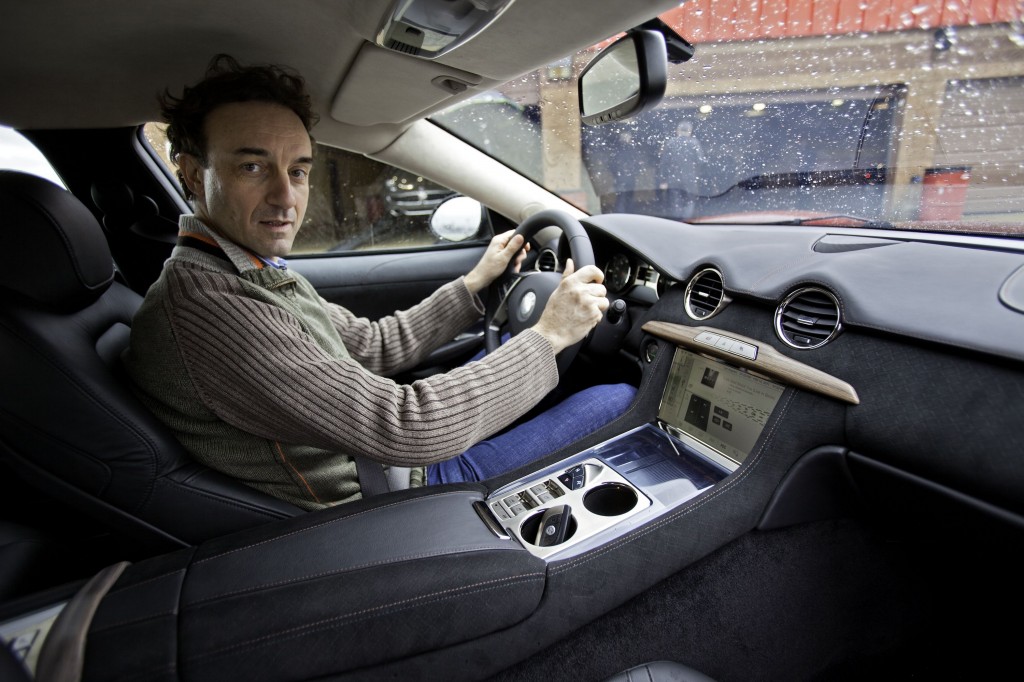 So how did this potential game-changer come about? In 2005, Danish-born company CEO Henrik Fisker and business partner Bernhard Koehler started rebuilding Mercedes and BMWs convertibles at Fisker Coachbuild until a chance meeting with Quantum Technologies changed everything. The alternative energy company had been contracted by the government to develop a “stealth” vehicle for the U.S. military’s elite Delta Force.

Able to be dropped behind enemy lines, this vehicle could penetrate strategic terrain in silent electric-only “stealth mode,” and then retreat back to friendly territory by engaging an on-board engine that acted purely as a generator, therefore doing away with the issue of range anxiety. When Fisker heard this gem of information, he knew that while this military-biased technology could not be copied for production cars, the system’s theory could be applied to the real world and form the basis for a future range of earth-conscious electric vehicles. So employing the Quantum theory, he created Fisker Automotive, put an R&D team together and by the 2008 Detroit Auto Show, had the Karma concept ready to reveal. 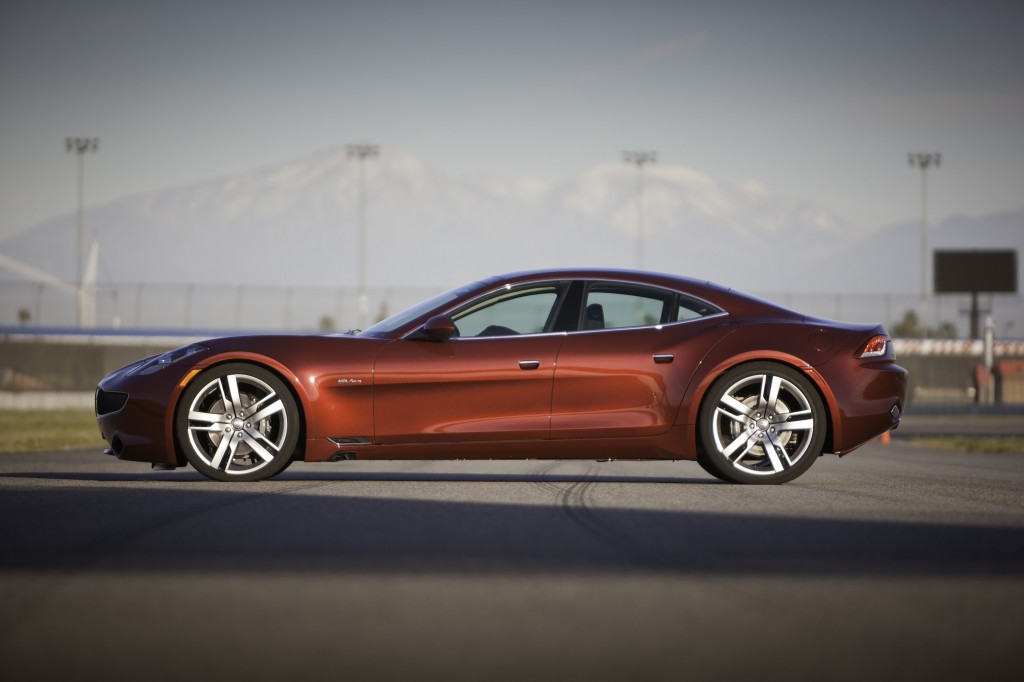 But before we get ahead of ourselves, we need to point out that Fisker doesn’t just head up the company as its CEO. He also happens to be chief designer as well. And when you consider that his previous jobs included penning the Aston Martin DB9, V8 Vantage and the BMW Z8, then it’s easy to see where the Karma’s European-inspired design flare comes from. With definite designs hints from Aston Martin and Maserati, first impressions are that this car just might be the most beautiful-looking sedan penned on American soil since the 70s. Among cars that wear an American badge, the only homegrown talent that comes even close to the Karma’s delicious exterior is perhaps the Corvette.

And while, thankfully, it doesn’t draw aesthetic inspiration from the Porsche Panamera, Fisker tells us that the German 4-door was his team’s benchmark.  “I had the basic Karma sketch done in a couple of hours. The final details, like the grille surrounds and wheel arches took a little longer,” he enthuses. Just then Bernhard Koehler cuts in. “But from Henrik’s design sketch to completion of the 2008 Detroit show car, it took us just 7 months! We are super quick with decisions because we are small and don’t have to go through committees like the big carmakers.” Now in the world of concept car creation, that may well be a new world record. 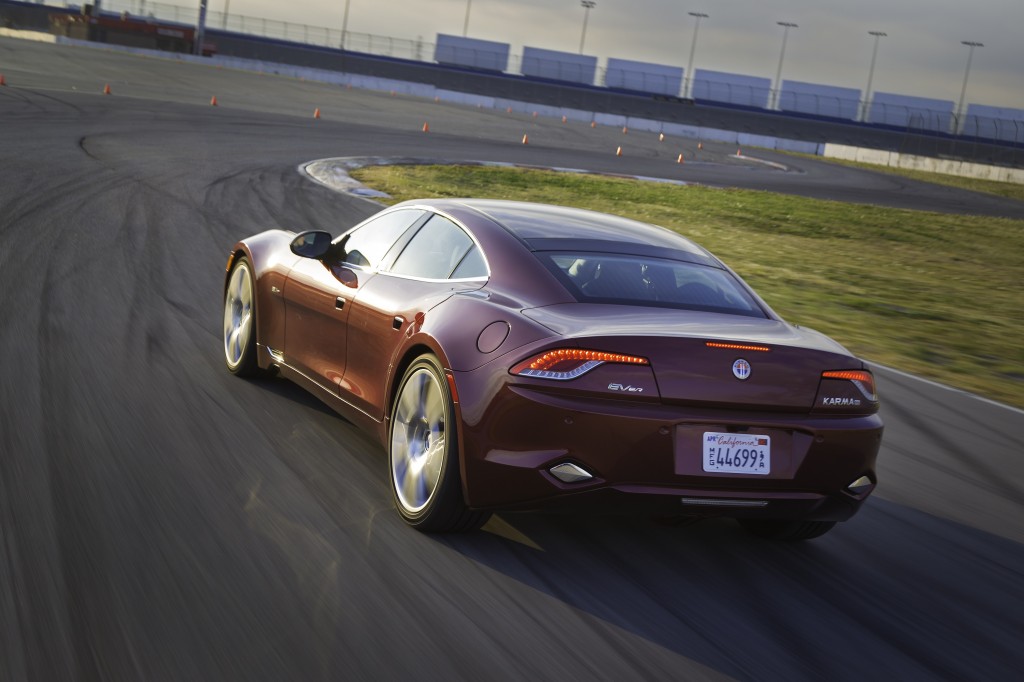 With its long wheelbase, wide track, low stance and sweeping lines, the car certainly stands out, being perfectly at home in the company of rivals Quattroporte, Panamera, Mercedes S550 and BMW 750Li. The sheet metal however, is just the icing on the cake. What sits on the Karma’s bespoke aluminium spaceframe chassis pushes the envelope of EV drivetrains. Co-developed with Quantum Technologies, the car employs that military stealth vehicle-inspired powertrain we mentioned above: twin, rear-mounted 150-kW electric motors and a lithium-ion battery pack.

After the battery charge is depleted, some 80kms later, a GM-built 4-cylinder 190kW 2.0 litre turbocharged petrol engine fires up to drive a generator that recharges the batteries. Simple, right? Interestingly however, unlike that other well-known American EV, the Chevy Volt, the Karma’s rear-wheels are only driven by the two electric motors, never by the engine. Fisker’s patented “EVer” (EV extended range) setup guarantees up to 80km EV-only range and around 400 kms with the engine, totaling over 480kms range extended capability. Plugging the car into a standard 110-, 220- or 240-volt outlet will completely charge the Karma’s fully depleted battery pack in as little as six hours. 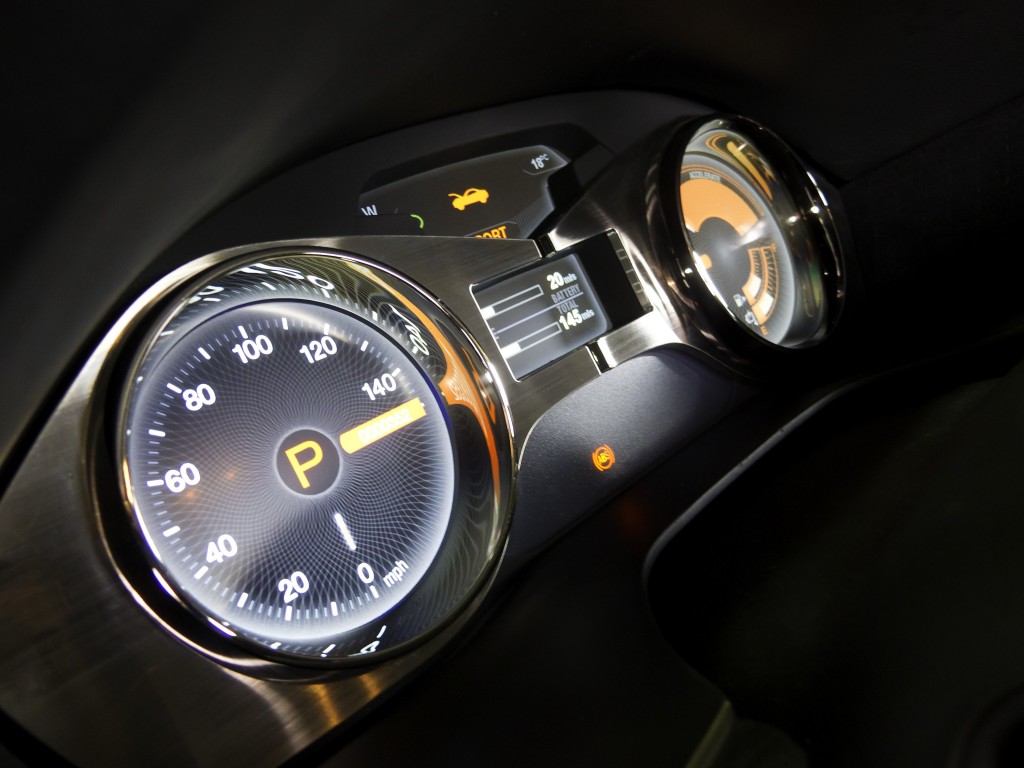 Out on the track, it soon became obvious that Fisker’s team means business. Press the start button, select D from the small pyramid gear selector on the centre console, and the car puts you into its default “Stealth” or EV-only mode. You have the option of flicking a paddle to select “Sport” and engage the engine for a boost in power, but more on that later.

As we taxied out onto the course at around 30km/h, we noticed (as with the Nissan Leaf) that Fisker has fitted an artificially-created ‘tron’ sound forward and aft to warn pedestrians of the Karma’s presence. Cool. Then we floored the throttle. This thing is certainly quick out of the blocks simply because you have 100% of the available torque on tap, instantly.  That’s 1330 Nm of torque, a figure only eclipsed by the mighty Bugatti Veyron. It’s not explosive acceleration, but it’s fast enough to please most. Even though the Karma has an unsubstantiated curb weight of 2 tons, it will sprint from zero to 100km/h is 7.9 seconds and reach a top speed of 155 km/h (in Stealth mode). 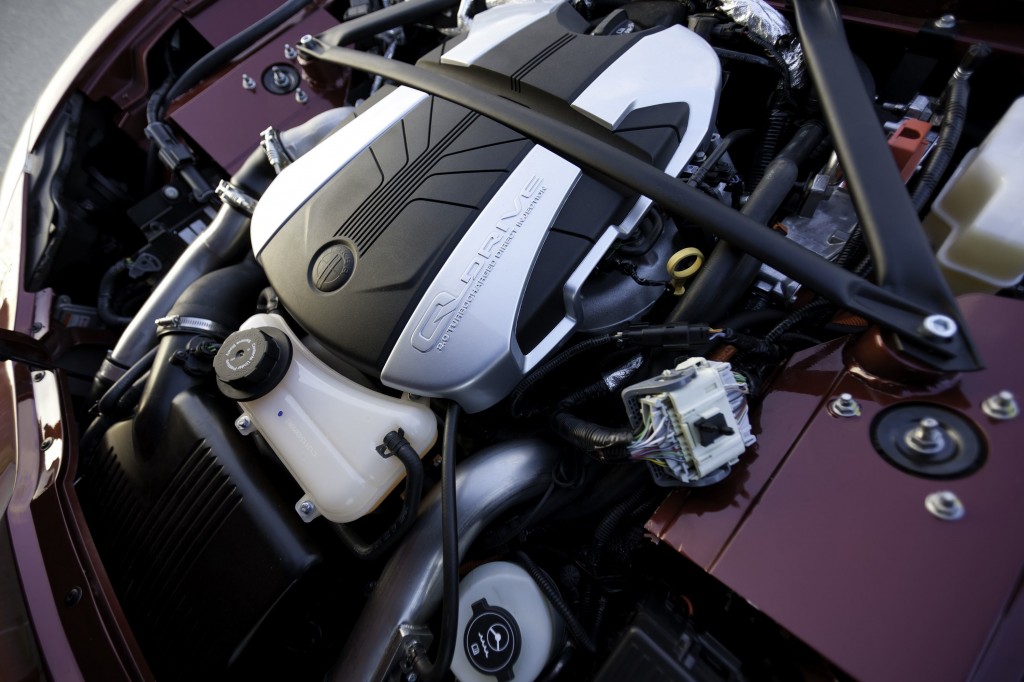 Unlike the pure electric Leaf or the Mitsubishi i-MiEV or even the Volt, the Karma is a far more engaging drive because the more you ask of the car, the more it rewards the driver. Apart from the “Responsible Luxury” tag that Fisker aggressively promotes, great handling was a “must” for the Danish boss and that’s why he recruited some very talented engineers from Mercedes, BMW and Toyota to transform his car into a viable EV force.

It only took one lap of the special street course to establish that the Karma handles like a very capable sports car. The double wishbone suspension with its forged aluminium arms and self-levelling rear dampers help rank the Fisker EV at the top of its class for on-road manners. Turn-in is sharp and precise with well-weighted steering and almost no understeer at the limit. 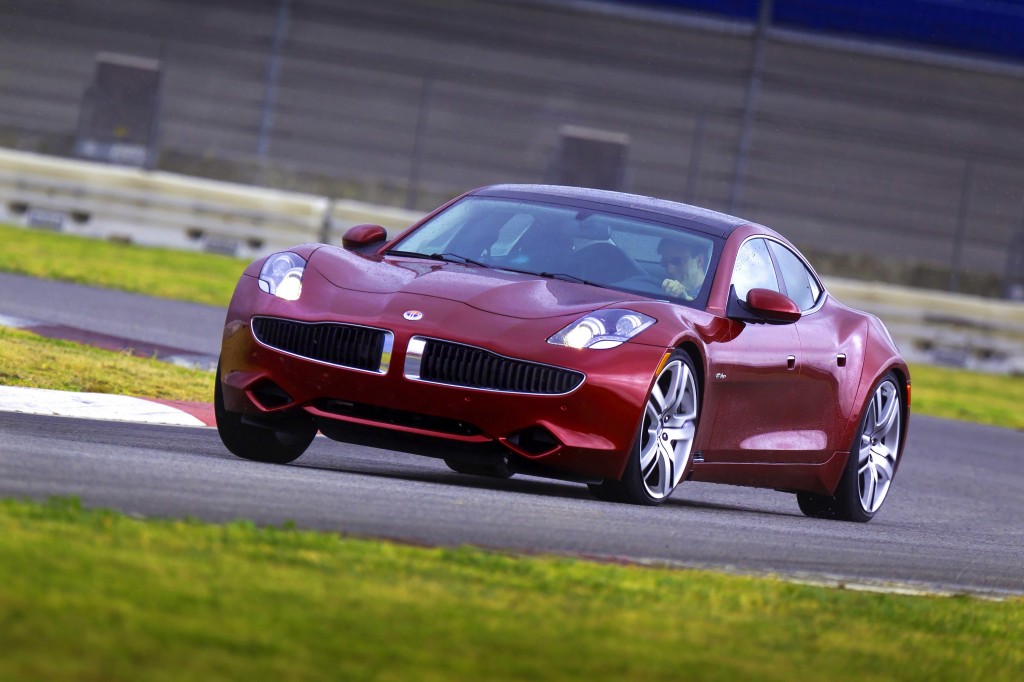 The car’s super long 3.16m wheelbase, wide front and rear tracks, low centre of gravity and huge 22-inch Goodyear Eagle F1 tyres all combine nicely to keep the Karma flat through the corners while generating minimal nose-dive under full braking. And she’s a honey when you go into a corner hot, because this sedan loves to slide. Dab on the brakes, turn-in, and watch the tail step out as you balance it through the corner on the throttle. Don’t get us wrong. Tyre grip is phenomenal and hangs on like a pitbull, but when the rear end does let go, the resulting slide is very progressive and the steering uncannily communicative. Oh, yeah and its 47/53 front-rear weight bias doesn’t hurt that handling equation either.

The only issue we had was with sound. Wind and road noise suppression are well executed. In fact, they are so well isolated that you can hear every little mechanical sound and creaky groan that eminate from the chassis and bodywork as the car flexes under cornering. Now, the fact that we are also cruising in silent Stealth mode only seems to compound those sounds, until, that is, we flick the steering wheel mounted paddle from Stealth to Sport mode. All of a sudden, the silence is broken by an engine that springs to life with a rather loud and raspy exhaust note delivered via orifices positioned down low just behind the front wheels. 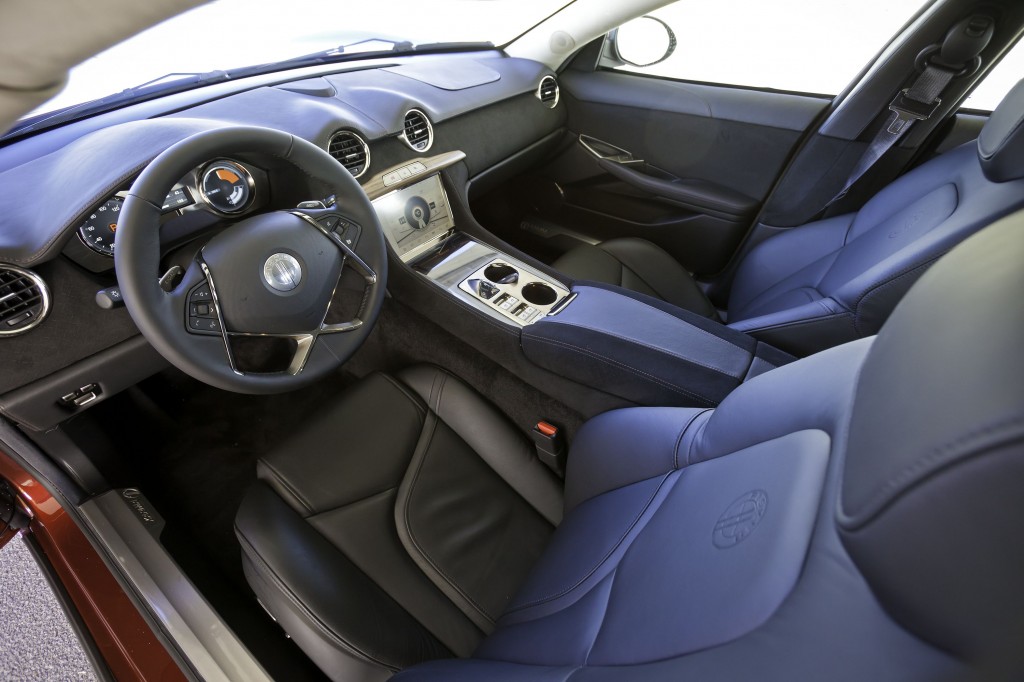 The first thing you notice, apart from the audible exhaust note and the turbo whistle, are the extra herbs. Powered by the engine, the generator not only recharges the battery but lifts the lithium-ion pack’s performance which in turn boosts power by a noticeable 20-25%. That switch to Sport now allows the car to sprint from zero to 100km/h in 5.9 seconds while elevating top speed to 200 km/h.

Strangely, or maybe not so, the exhaust note resembles a Pontiac Solstice GXP tone, a car that employs the same 2.0 litre turbo as the Karma. Many things about this car are unique, and the fact that the exhaust pipes are located in a place that makes them more audible are all part of the Karma driving experience. Just a pity they couldn’t tune the 4-cylinder’s exhaust note to sound like a V8.

A 6-piston Brembo brake setup with 4-pistons up the back, pulls up admirably and resists fade. Brake pedal rigidity is firm and progressive while squeezing the right paddle allows you to engage Hill mode and select between three levels of regenerative braking, a feature that simulates the effects of downshifting.

A class of its own

We can think of no competitor that could negotiate our high-speed twisty course with as much poise as the Fisker and yet look so good doing it, except perhaps the Quattroporte. All that’s not surprising when you think that the Karma might have been designed and engineered in California, but the actual production cars are built at the Porsche factory in Valmet, Finland alongside Caymans and Boxsters. Which begs the question: is the Karma American? We think mostly yes. But there is another in the pipeline that will be conceived and built in the U.S.

By pushing the “Eco” button in a big way, the U.S. government started to pay attention to Fisker’s dealings to the extent of a hefty $529 million injection from the Department of Energy. That allowed him to purchase GM’s former Delaware plant where the next car will be made, the lower-priced and smaller Nina. It will also allow Fisker to expand his ‘responsible luxury’ theme that has seen the green company create a clean luxury EV which incorporates an interior with timber reclaimed from California forest fires and Michigan lake bottoms, as well as leather with minor blemishes and Alcantara for the seats. Speaking of seats, front room is plentiful while I was able to fit my 190cm frame into the back seat, just. Not bad for such a car. 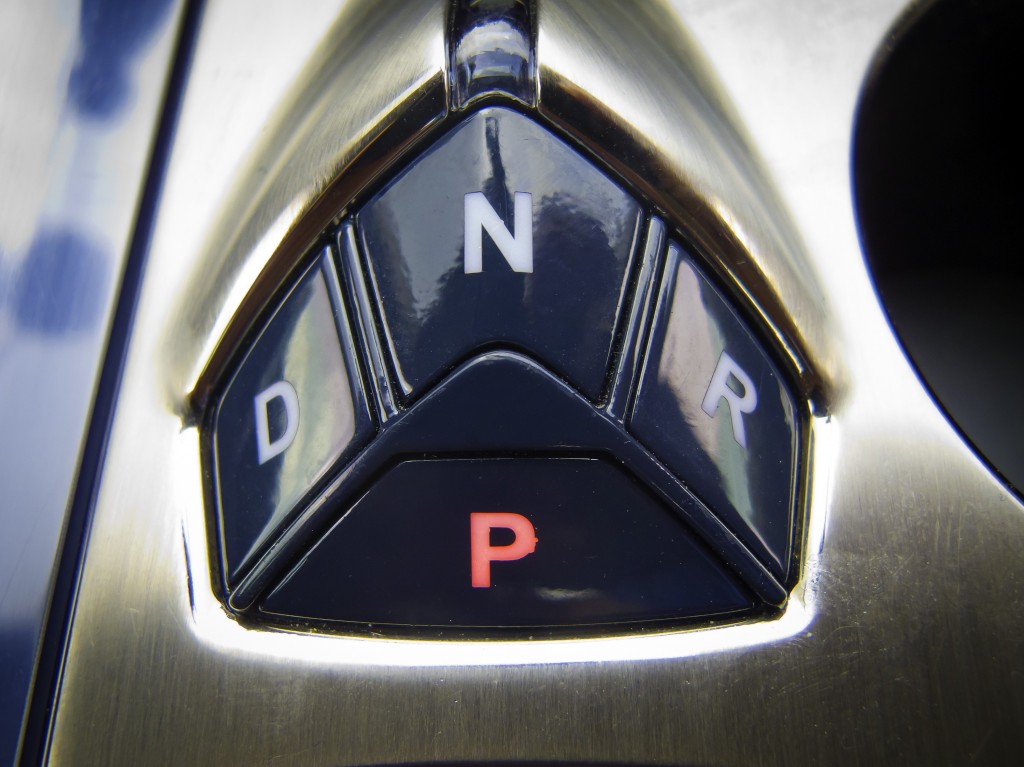 Yet another first is the Fisker Command Center in the center console. Compared to other fidgety in-car information systems that we find on some German marques for example, this system is a revelation and a cinch to use. It features a huge industry-first 10.2-inch force-feedback touch-screen that centralizes almost every vehicle control. In addition, the Command Center can display power flow in the Karma’s EVer powertrain, including energy gain from the solar panel roof which can generate enough power to drive the car over 300 kms over a year. 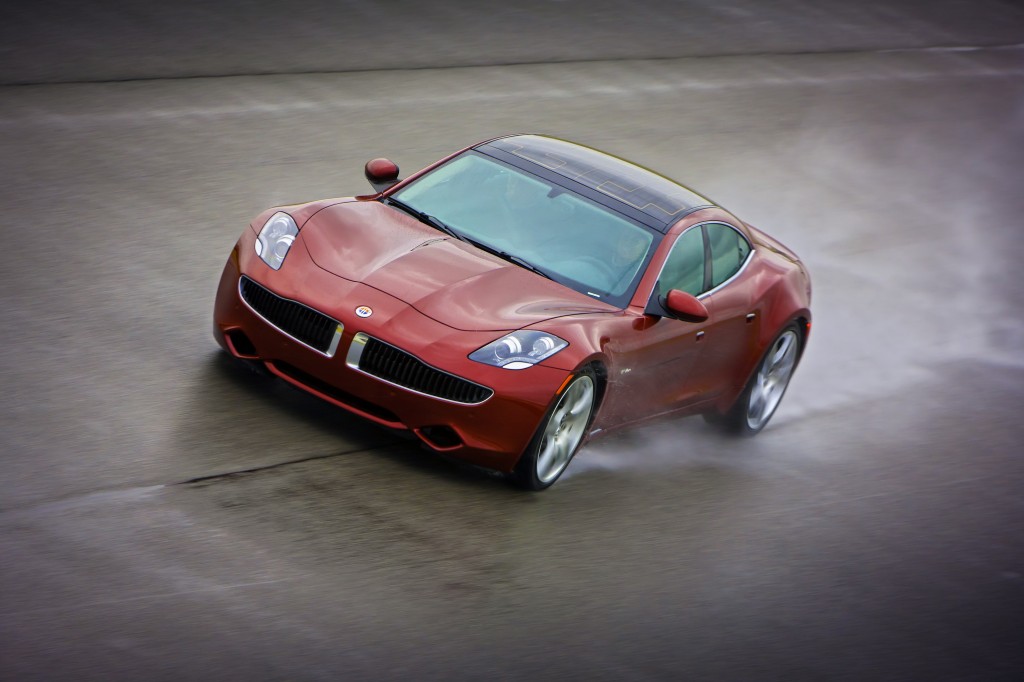 The Karma might be the newest kid on the block, and the company still has to push hard to get its brand image into the international arena, but the signs are bright for sure. Our brief drive convinced us that this car has a lot in its favour. Starting with those drop-dead good looks, unique engineering, superb ride and handling and a surprisingly quick green “Prius-beating” powertrain that sets new standards for CO2 emissions and mileage, we think it’s going to make a lot of the established names stand up and pay attention. The fact that over 3,000 orders have already been taken for this US$96,850 (base price) car hint at a potential market that could see customers ranging from Porsche and Mercedes cross-shoppers to green driving enthusiasts to the likes of Leonardo and Cameron….and George and Julia and Brad and Tom…. Hmmm, wonder who’s going to be the first one to roll up to the red carpet on Academy Award night in Stealth mode… 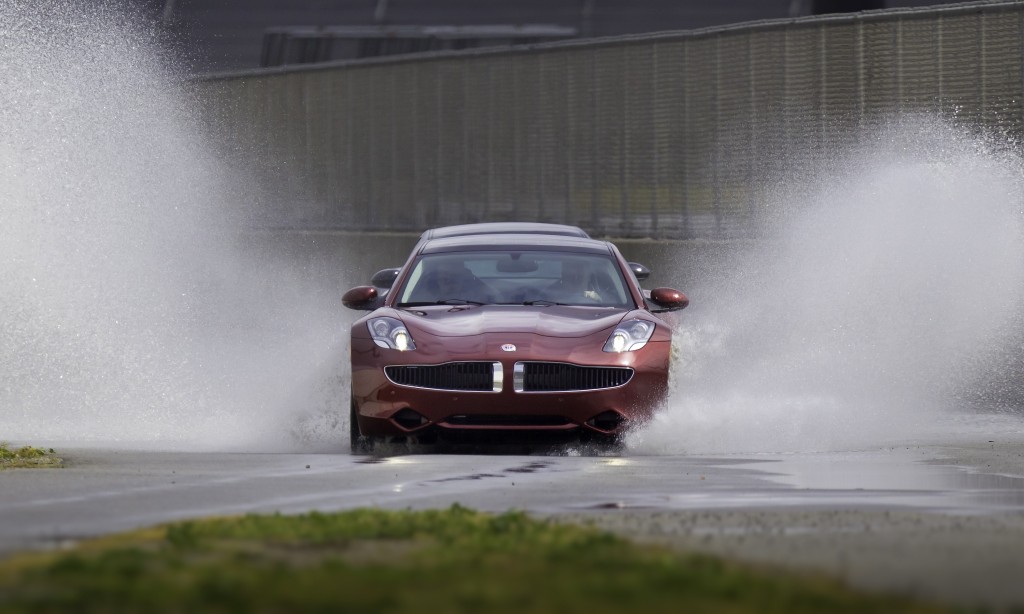