At a press conference today hosted by Bridgestone Corporation and the New York International Auto Show, the Nissan Leaf was declared the 2011 World Car of the Year.

As co-chair of the World Car Awards, it was my job to announce the winner at the Javits Center in New York – in typical Academy Award style “and the winner is…” – before presenting the trophy to Nissan Americas’ Brian Carolin, SVP, Sales and Marketing.

The Nissan Leaf was chosen from an initial entry list of thirty-nine new vehicles from all over the world, then a short list of ten, then three finalists:  the Nissan Leaf, Audi A8 and the BMW 5 Series.

“It is a great joy that the world’s first, mass-marketed electric vehicle, the Nissan LEAF, has won the prestigious award of 2011 World Car of the Year,” said Nissan Chairman and CEO Carlos Ghosn. “This accolade recognizes Nissan LEAF, a pioneer in zero-emission mobility, as comparable in its driving performance, quietness and superb handling to gas-powered cars. And it validates Nissan’s clear vision and the values of sustainable mobility that we want to offer to customers around the world.” 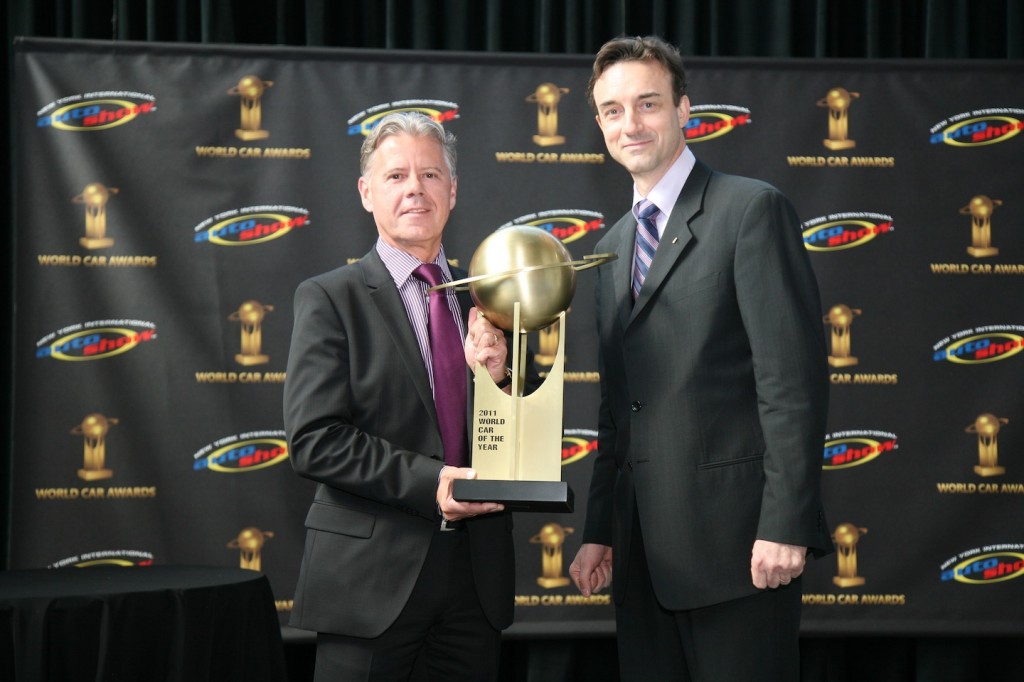 The World Car Awards jurors observed that, “The Leaf is the gateway to a brave new electric world from Nissan. This 5-seater, 5-door hatchback is the world’s first, purpose-built, mass-produced electric car. Dropped onto a unique platform and body, the Leaf’s lithium-ion battery modules and electric motor generate 108hp and 206 lb ft of torque, propelling the hatch from zero to 60mph in 11.5 seconds and a top speed of 90mph. It has a range of over 100 miles on a full charge claims Nissan, takes around 8 hours to recharge using 220-240V power supply and produces zero tailpipe emissions. Its low center of gravity produced sharp turn-in with almost no body roll and no understeer. The good news? It feels just like a normal car, only quieter”.