With Japanese carmakers closing their factories following the earthquake and tsunami, investors instantly wanted out. So on Monday the value of shares in Japanese automotive companies tumbled as investors started selling up. 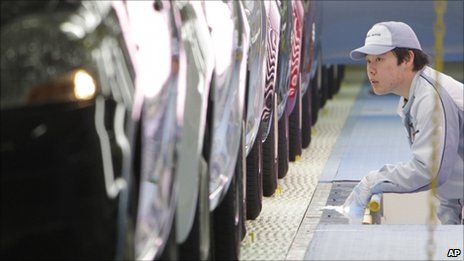 Initially, many of them bought shares in carmakers elsewhere in the world instead – based on the logic that non-Japanese automotive firms would fill the gap left by Japanese carmakers unable to deliver.

“Hyundai and Ford now are good substitutes for Toyota’s cars, and even more so, Caterpillar tractors made in China can replace Komatsu’s land movers,” according to Peter Morici, a business professor at the University of Maryland.  “Globalisation offers Japan’s export customers alternatives they might not have enjoyed a decade or two ago.”

Other carmakers, such as Toyota and Nissan, are understood to be facing similar parts shortages to Honda.

Meanwhile, Chrysler has become the latest carmaker in the US affected by disruption in the aftermath of Japan’s earthquake. America’s number three car manufacturer is cancelling overtime work at some of its North American assembly plants due to parts shortages. Last week, Ford said it would idle its Kentucky truck plant, while General Motors has also stopped production at a plant due to parts shortages.

Toyota’s credit rating may be cut

Toyota’s credit rating has been put under review by the ratings agency Moody’s, which said it may downgrade the Japanese car giant.

Moody’s said the company’s profits are likely to be hit by the impact of the 11 March earthquake and tsunami. Earlier on Wednesday, Toyota said that production at most of its domestic factories will remain suspended until at least next week. Production at its plants has been halted since the crisis began.

“There will be no resumption of production at most of our domestic factories next week,” a Toyota spokeswoman said. Moody’s expects the delays to last even longer. “Limited production re-commenced at some of the factories at the end of March, but normal production cannot be expected for many months,” the agency said in its statement.

It says the company is also likely to hit by the impact of the devastation on Japan’s overall economy. “Toyota’s dependence on the Japanese market is still high, at about 27%,” the agency said. “Expected weak consumer sentiment may have a negative impact on domestic demand that ensuing replacement demand may not be able to offset,” it added.

While the suspension of production at its domestic factories is grabbing all the headlines, Moody’s said that issues with quality control will also hurt profits. Toyota has recalled almost 12 million cars worldwide in the past 18 months due to various safety concerns.

The agency said that as the company invests to put in place better safety and testing procedures its margins are likely to squeeze even further. “The company is trying to recover from the quality problems it suffered last year, so its quality-related expenditures remain high,” Moody’s added.

The spate of recalls has not only hit the company financially but has also dented its image. Moody’s said the recalls may have affected the perception of Toyota’s quality.

It warned that even though Toyota’s credentials still remain high, the company will find it tough to get back its lost market share. “Restoring its dominance in many of the world’s major markets will be difficult in light of rising competition,”

Honda is to halve production at its factory in Swindon from Monday because of a shortage of parts coming from Japan. Honda said that the 3,000 workers would remain on full pay.

It was confident that the 22,500 fewer cars that would be built as a result could be made up by the year end. Many carmakers have struggled because of shutdowns to plants affected by the earthquake and tsunami in north east Japan. 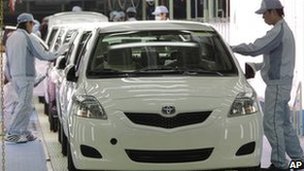 Microsoft and Toyota have announced plans to work together to bring internet services to Toyota vehicles. The world’s biggest carmaker and the world’s biggest software company are investing $12m (£7.3m) in Toyota Media Services, a Toyota unit which handles digital information services.

The aim is to provide features like GPS, power-management and multimedia services. Toyota’s 2012 hybrid vehicles will be the first to get the services. The carmaker hopes to be able to offer them to customers worldwide by 2015.

The services will use Microsoft’s “cloud computing” – the remote storage and handling of data – system called Azure.  “This new partnership between Microsoft and Toyota is an important step in developing greater future mobility and energy management for consumers around the world,” Toyota president Akio Toyoda said. Microsoft has been involved in the auto industry for several years but has so far focused on working with Ford.

It designed Ford’s Sync entertainment system, which was rolled out in 2007 and allows drivers to make phone calls, listen to text messages and use GPS.